With word today of the impasse on Capitol Hill and the resulting shutdown of Government, the flurry of finger pointing starts. And 17 years ago it was pretty much the same thing. The faces, for the most part, have changed. The tactics have remained pretty much the same. The lunatic fringe is more vocal now and the polarization is more pronounced than it was 17 years ago.

But in December 1995 it was the culmination of events that began with the first (four day) shutdown in February of that year. The tantrums continued. The people suffered. Life went on. The Shutdown dragged on for 21 days, the second time around.

Indications are this shutdown will have bigger consequences. In 1995 no one knew what those consequences would be. And in 2013 no one really does either. There are predictions of backlash, revenge at the polls during the 2014 mid-term elections and widespread panic. Since October is historically Padded Cell Season on Wall Street, anything can happen.

But most likely as before, life goes on  – and there are bigger concerns to deal with – bigger consequences. Sometimes, the name of the game is distraction. And sometimes, people in high places just throw tantrums because they can.

So here, as a reminder of the last time Capitol Hill shut the Government down, are a series of reports from December 16-21, 1995 via The CBS World News Roundup. Something to compare notes to.

And the band will surely play on. 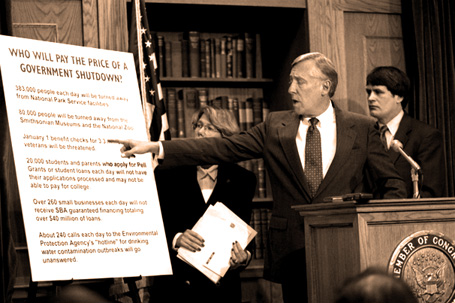