And every day that went by, we sank deeper into the quicksand.

As questions began to raise regarding our role in Southeast Asia, it was still early on in the game to see just where this excursion was heading. There was still majority support for the Vietnam war. The sharp divisions were a ways off, as was the tide of public opinion against the war. By 1965 it was still rather unclear what our role was, but most people, particularly those in Congress, were going along with Foreign Policy. But even in 1965, indications were clear things were spiraling out of control faster than anticipated.

But in 1965 the plate was rather full.There was the War, but it seemed too distant for the moment. In front of the country was the issue of Civil Rights, the issue of Poverty, the issue of Healthcare – the ever-present Cold War, to which the adjunct of Vietnam was characterized, and justified in the minds of many as part of the “Domino Theory“; the big fear that Communism would gain a foothold in Southeast Asia and it was only a matter of time before it was knocking on our doorstep. That was the opinion and that was the Cold War climate shared by many on Capitol Hill.

In this Meet The Press episode, from February 28th, 1965, newly elected Senate Majority Whip Russell Long (D-LA) was asked about the Vietnam War, but also asked about the question of Civil Rights; pending legislation being proposed by President Johnson, and where Capitol Hill stood on the issue of Voting Rights.

Long is outspoken in his support of the Vietnam War – less forthcoming on his views regarding the Civil Rights issue – feigning no knowledge of the proposals being sent from The White House. Well he was a Senator from the South after all . . .

To give you an idea of the political climate, prevalent at the time, here is that Meet The Press featuring Senator Russell Long and a panel of reporters from various news outlets.

Still miss it when one politician was grilled by three journalists, rather than three politicians busy sandbagging one journalist.

But that’s my opinion. 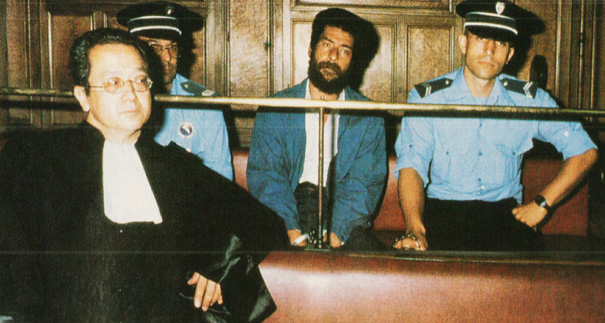 Ibrahim Abdullah – “Just too good to be let off lightly”.

Click on the link here for Audio Player: News for February 28, 1987

News for this February 28th in 1987 was about the surprising turn of events in a Paris court, for the trial of terrorist suspect Ibrahim Adbullah. Convinced Abdullah would be given a light sentence, since the Defense argued he was a “little guy” in various bombing plots around Paris and complicity in the murder of American Diplomat Nicholas Ray. But the court surprised everyone by giving Abdullah the maximum; life in prison.

In other news closer to home – The White House announced a new Chief of Staff. Senator Howard Baker was appointed by President Reagan to replace outgoing (read: fired) Chief of Staff Donald Regan. The appointment was met with bi-partisan approval. It capped a tense 48 hours, with the release of The Tower Report on Iran-Contra and an angry outgoing statement from Regan. A sigh of relief was audibly heard on Capitol Hill.

The beach along Jacksonville, was the scene of an 18 mile long oil spill off the coast of Florida from a ruptured Freighter fuel tank. The slick extended some 30 miles up and down the coast, making for the worst oil spill in a decade in the area.

And it was the one year anniversary since the assassination of Swedish Prime Minster Olaf Plame, shot to death on a Stockholm street and tossing the entire country of Sweden into a state of shock and disbelief.

And that’s some of what went on this 28th day of February in 1987, as presented by The CBS World News Roundup.

Kings Of Leon – Live In Amsterdam 2009 – Nights At The Roundtable: Mini-Concert Edition

Click on the link here for Audio Player: Kings Of Leon – Mini Concert 2009

Something familiar tonight. Nashville‘s own Kings Of Leon, recorded in concert in Amsterdam in 2009. Big things in store for the band this year, including a huge European Summer tour, headlining with Beyonce. Dates and venues are still being announced, as well as some U.S. gigs being lined up for Spring.

In the meantime, a mini-concert to get you in the mood compliments of the ever-present/ever-trustworthy/ever-amazing  VPRO in Holland.

Van Cliburn in Moscow – 1958 – Did more to improve East-West relations than all the Politicos combined.

Only two months into 2013 and there have been way too many tributes to the passings of legendary and influential musicians. And as of today, there is another one. The sad news of the passing of Van Cliburn, the pianist who put the Cold War of the 1950s into a state of suspended animation and made us forget East-West tensions as he took the music world by storm, winning the 1958 Tchaikovsky Piano Competition in Moscow.

His charm and mastery of the instrument made him the instant idol of millions of piano students, and his name became a household symbol of what you could do if you practiced hard enough. Every student of Classical music wanted to be Van Cliburn, it seemed.

So as tribute to the passing of this giant in the world of the Performing Arts and a reminder of his magic and deft command of the instrument, here are two concerts, both featuring the Boston Symphony conducted by Erich Leinsdorf and both recorded in 1964. The first one (the top player) features Brahms Piano Concerto No. 1 and the second (the bottom player) features Liszt’s Piano Concerto’s Number 2 and 1 (in that order as they were performed).

The Brahms was given at the Tanglewood Festival in July of 1964 and the Liszt was given at a regular concert given in November of 1964.

A unique and influential voice – sadly stilled and much missed.

Click on the link here for Audio Player: News for February 27, 1960

Busy day, this February 27th in 1960. President Eisenhower, continuing his tour of South America was given a warm welcome, at first, in Buenos Aires. But protests quickly got out of hand with teargas flying along with rocks, and Ike decided it was a good idea to take some time off and go golfing. South America was rapidly becoming a hotbed of anti-American sentiment, particularly since Cuba was proving to be a major fly-in-the-ointment to U.S. Foreign policy.

But the world continued to spin no matter what. And news from Buckingham Palace was greeted with a goodly amount of hoopla, as it was announced Princess Margaret said yes to Photographer Anthony Armstrong-Jones and wedding bells were set to chime in the near-future. Tensions were also ratcheting up in the Middle East with yet another threat of all-out war looming.

The U.S. was doing so-so in the Winter Olympics, taking 2nd place in Squaw Valley. The U.S. was also doing so-so with the South scoring an epic Fail in the area of Civil Rights. The Lunch Counter protests were continuing and gaining momentum, while the racist element were rearing their lily-white heads in opposition, prompting noted Black Comic Jackie “Moms” Mabley to say “I don’t want to go to school with you, all I want is a piece of that cheesecake”.

And so it went – this February 27th in 1960 as presented by The NBC World News Roundup (yes, they had one too).

Maez – Live At RNE Radio 3 – 2012 – Nights At The Roundtable: Mini-Concert/Rock Without Borders Edition

Ever since Mumford & Son quietly overwhelmed the Pop music scene, with their stripped-down, straight-ahead production and emphasis on acoustic rather than electric instruments, it has signalled something of an “okay” for a lot of bands to take the acoustic route and do likewise. And the result has been, not only interesting, it’s become world wide and gaining a lot of popularity in the process.

Tonight, for example is Maez, a band fronted by singer-songwriter Pablo Matias Lopez, who has only been doing this since 2010. Maez is being categorized as “neo-Folk”, and that may be something of a pigeon hole because I think this band has a lot going for it at the moment. Having released their debut album We’ll Never Make It Home last year, they’ve been gathering a good word of mouth outside their native Spain and I suspect we’ll be seeing them over on this side of the Atlantic sometime this year.

They recorded this mini-concert in the studios of Radio Nacional Espana’s Radio 3 as part of their Los Conciertos de Radio 3 on September 28th of this past year, and it gives a pretty good idea of what this band is up to.

The extra added bonus is they sing in English, which I am noticing a lot, if not most, bands from Europe are doing in recent years.

I found myself giving this a repeat listening – there’s a lot going for it and Maez is definitely a band to watch out for in the coming year.

You heard it here first. 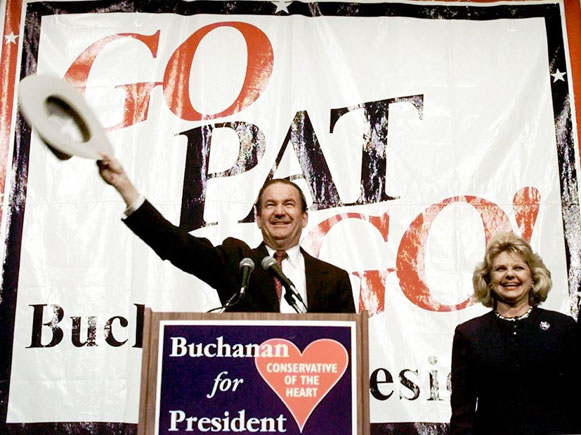 Pat Buchanan: “Take a couple Prozac fellas, an’ calm down”.

Click on the link here for Audio Player: News for February 26, 1996

It was Primary season, this February in 1996. And the news for this February 26th was the campaign of Senator Bob Dole was in big trouble, financially. And with the upcoming Arizona Primary slated for the following day (February 26th in 1996 fell on a Monday, so . . .), the odds-on/coming-up-from-behind favorite was former Nixon speechwriter and ultra-Conservative pundit Pat Buchanan. This sudden turn of events for both the Dole and Buchanan campaigns tossed the proverbial monkey-wrench in the primary season, and the GOP was in an uproar over the possibility that, one more time, the GOP would be hijacked by the hardcore. And the horserace was turned into campaign for survival. Dole remained upbeat – Buchanan chuckled.

But in other news – Cuba was back on the front burner with additional sanctions being considered by the White House in light of an incident involving Cuban jets shooting down two unarmed planes. The Cuban government was reportedly holding one of the pilots, protesting that the planes were trespassing on Cuban air space and had proof it was no accident. The U.S. counter-protested that it was Cuba who was in violation of International air space.

In the Middle East, tensions were high proceeding a terrorist attack the day before, and a truck that plowed into a group of civilians in Jerusalem on this day was determined to be an accident, rather than a terrorist attack, even though bystanders believed it was and shot the driver dead. The driver was identified as a U.S. citizen living in the West Bank.

In Los Angeles, actor Hang Nor, who won an Oscar for this performance in The Killing Fields in 1984 was murdered outside his home.

And above Earth- a satellite on board the Shuttle Columbia, broke from its tether and drifted off into space, making it the second such failure for NASA.

And AOL, Compuserve and Prodigy were expected to appear in court to challenge the new Communications Decency Act, saying the Internet wasn’t like Television, but rather like newspapers and deserved the same First Amendment protection.