A Word From John Paul II From The United Nations About A World Gone Askew – October 5, 1995 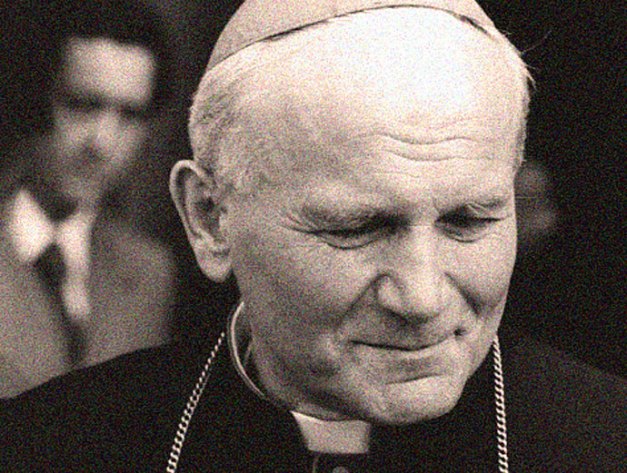 The solution was simple – it was the problem that was complex.

Billed as the last address he would give at a gathering of the United Nations General Assembly, Pope John Paul II delivered an impassioned plea for peace in a world rapidly spiraling out of control . . . . or continuing to spiral out of control, on October 5, 1995.

With news that a tenuous peace had been struck in the powder keg of the Balkans only moments before the Pope was to give the address, his speech made that plea all the more urgent.

Pope John Paul II: “We need to clarify the essential difference between an unhealthy form of nationalism, which teaches contempt for other nations or cultures, and patriotism, which is a proper love of one’s country. True patriotism never seeks to advance the well-being of one’s own nation at the expense of others. For in the end, this would harm one’s own nation as well: doing wrong damages both aggressor and victim. Nationalism, in its most radical forms, is thus the antithesis of true patriotism, and today we must ensure that extreme nationalism does not continue to give rise to new forms of the aberrations of totalitarianism.”

Although both the message and the messenger were, and continue to be, subject to ironies, the spirit of peace and the necessity to work things out, rather than engage in continuous war was more crucial in those closing years of the 20th century than ever before. That we were slowly slipping into a world of factions, ideologies and terrorism would become abundantly clear in the coming years.

That this address by the Pope had more ominous overtones for the future than we could have imagined at the time is still being scrutinized. That we are becoming the thing we have feared the most is yet to be fully played out.

Here is that address (in progress) from Pope John Paul II to the United Nations General Assembly, on October 5, 1995.

Trying to take the bite out of the Cold War.

A United Nations address during times of great change. East-West relations were tenuous at best. UN Secretary Dag Hammarskjold had been killed while on a fact-finding mission to the Congo only days earlier. The area of Southeast Asia was undergoing a state of instability, with Vietnam slowly but surely spiraling out of control.  Berlin was a smoldering flash point, Cuba was trying  out postures. South America was looking at its relationship with the U.S. with perplexity. And all in all, the world just seemed slightly unhinged.

So when President Kennedy delivered his address to the General Assembly on September 25, 1961, it was in the midst of great tension and uncertainty. And even in 1961, the concept of Terrorism was very much on everyone’s mind.

President Kennedy: “Terror is not a new weapon. Throughout history it has been used by those who could not prevail, either by persuasion or example. But inevitably they fail, either because men are not afraid to die for a life worth living, or because the terrorists themselves came to realize that free men cannot be frightened by threats, and that aggression would meet its own response. And it is in the light of that history that every nation today should know, be he friend or foe, that the United States has both the will and the weapons to join free men in standing up to their responsibilities.

But I come here today to look across this world of threats to a world of peace. In that search we cannot expect any final triumph-for new problems will always arise. We cannot expect that all nations will adopt like systems–for conformity is the jailer of freedom, and the enemy of growth. Nor can we expect to reach our goal by contrivance, by fiat or even by the wishes of all. But however close we sometimes seem to that dark and final abyss, let no man of peace and freedom despair. For he does not stand alone. If we all can persevere, if we can in every land and office look beyond our own shores and ambitions, then surely the age will dawn in which the strong are just and the weak secure and the peace preserved.

Ladies and gentlemen of this Assembly, the decision is ours. Never have the nations of the world had so much to lose, or so much to gain. Together we shall save our planet, or together we shall perish in its flames. Save it we can–and save it we must–and then shall we earn the eternal thanks of mankind and, as peacemakers, the eternal blessing of God.”

In the coming days and weeks tensions would ebb and flow, but the fear of all-out war and nuclear annihilation remained.

It was just that kind of a world fifty-two years ago.

Here is that complete address, as given by President Kennedy on September 25, 1961.