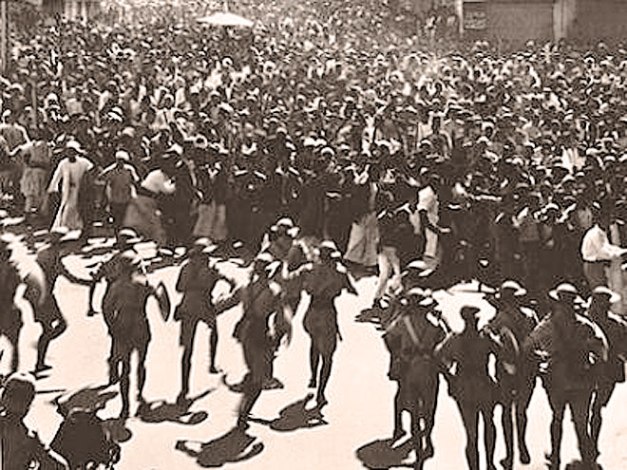 Arab rioting in Palestine 1946 – A lit fuse, ready to blow any second.

News for this particular May 3rd in 1946 was about the Middle East, primarily the area of Palestine. And the news wasn’t good. With tensions between Arabs and Jews mounting, with violence breaking out seemingly everywhere in the region, and the Partition Plan being proposed by the British government, it was a disaster waiting to happen.

With the mass migration of Jewish refugees streaming in from Europe, the vast majority recently liberated from the horrors of Nazi concentration camps, the new influx of immigrants brought with it fears from the Arab community of being overrun and pushed out of land believed to be theirs.

Since Britain had assumed the role of protectorate of much of the Middle East since the close of World War 1, some solution to the potentially deadly problem had to be found. But clearly, it looked like a no-win situation for all parties. And the threat of an all-out civil war was a real possibility, despite claims from London that this wasn’t the case. The body counts told a different story.

So the news for this day, as reported by Newscaster/Commentator Cedric Foster was an attempt to explain this powder-keg situation in a region not that well known in the U.S., but one that looked increasingly like a source of our problems in the future.

And some sixty-seven years later, it’s still a powder keg.

And that’s what was happening in at least one part of the world for May 3, 1946. 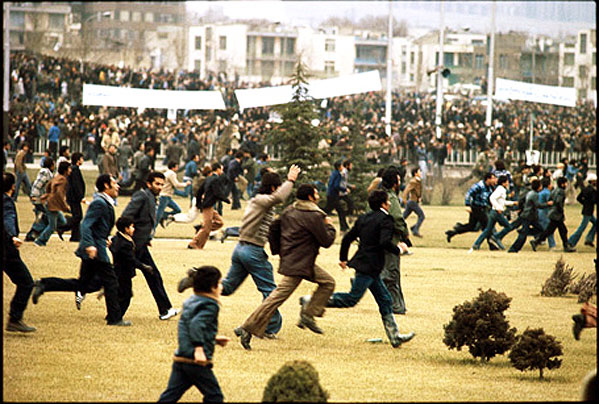 The pro and anti Shah tug-of-war got crazy.

With no end in sight and protests continuing and becoming more violent, the situation in Iran on this day in 1979 was anything but resolved. The Pro and Anti-Shah factions were battling it out in the streets and it was only escalating with each passing day.  As of this day, the scheduled arrival in Tehran of the Ayatollah Khomeni from Paris was being delayed until Sunday.

Meanwhile, the rest of the news on this January 25th in 1979 came mostly from Capitol Hill with reports on President Jimmy Carter sending Congress his annual Economic message where he stressed that reducing inflation must be the nation’s top priority. Federal Reserve Board Chairman G. William Miller called for austerity measures to be put in place for a time in order to beat inflation. Miller was testifying before the House Budget Committee. The Pentagon, on the other hand, was asking for a record $112 billion dollar Defense budget, saying the Soviet Union was the reason why and he considered even that amount for defense somewhat austere. Needless to say, the Budget battle was going to be a long one for 1979.

Elsewhere in the world – Labor troubles were plaguing Britain and Parliament was being dragged into the fracas over what was termed a deteriorating economic and industrial situation. Pope John Paul II left the Vatican for a tour of The Dominican Republic and Mexico for his first tour of the region since his Pontificate. Middle-East Peace talks were continuing, and continuing, and continuing.

And weather was also in the news, with a record cold wave hitting the mid-west.

All that, and a whole lot more for this January 25, 1979 as reported by The CBS World News Roundup, CBS News On The Hour and Walter Cronkite’s News and Analysis.

Prepping For An Inaugural, Avoiding A Confrontation – January 14, 1957 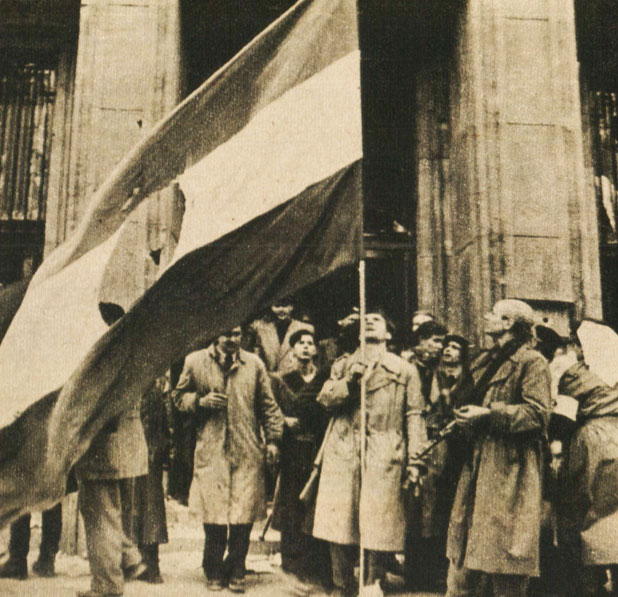 The Soviet crackdown in Hungary was still going on.

News for this day was largely relegated to speculation on the new Eisenhower term, since the Inaugural was a little over a week away, this January 14th in 1957. But it was also concerned with developments in the Middle-East and the ongoing crackdown, trials and executions over the Hungarian Revolt just several weeks earlier. The latest batch of fears came with rumors of Communist infiltrators landing in the U.S. in droves, pretending to be Hungarian refugees.

From this collection of newscasts, all from this day, there was a protest movement afoot (promoted primarily by Fulton Lewis Jr. and his Mutual Radio Program) over the invitation by the White House of members of the newly-installed Puppet regime in Budapest, to the inaugural Ball. Lewis read answers to the protests and urged listeners to keep writing – supplying pertinent names and addresses to which the protests were directed.

Also bubbling close to the surface were tensions in the Middle-East. Israeli occupation of Gaza and Egyptian sabre rattling and threats to drag the U.S. into the conflict were not sitting all that well with The State Department.

And the happenings aroundCapitol Hill were subjects of reporting, most notably with threatened shakeups in  Congress and the power-plays ensuing.

That and a lot more for this January 14th in 1957 as reported by Fulton Lewis Jr. and Cedric Foster via Mutual Radio. 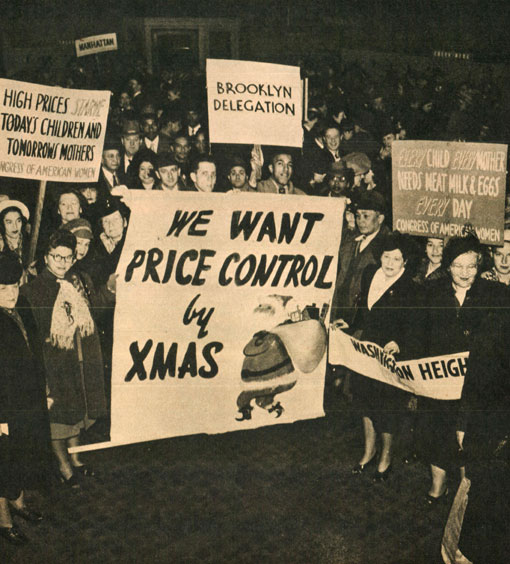 The Post-War Economy was a thing of bafflement.

Click on the link here for Audio Player: News for December 10, 1947

On this day in 1947 it was revealed in a study of businesses that yes, older workers were more reliable than their younger counterparts. Loyalty and sick days were a big factor.

In other news, for this tenth day of December in 1947. The Cold War was rearing it’s head in a lot of different places. The most notable being at the Foreign Ministers Conference in London, where Russia presented a demand of $ 10 Billion in reparations from Germany after the War. The subject of Communism and “The Red Scare” was also pondered in relation to the upcoming 1948 Presidential elections. And the “Red Influence” was being looked at by the government of Prime Minister Robert Schuman in France. They had recently concluded a series of crippling strikes around the country and were looking to prevent a recurrence in the future.

The Middle-East was continuing its flare ups, since reparations went into effect the previous week. An Arab attack on a Jewish settlement resulted in 3 Jewish deaths. British troops were called in to patrol the “no-man’s land” between Arab and Jewish settlements in Palestine. Tensions were on the increase.

And a pending strike by workers at Western Union was raising eyebrows all over Capitol Hill.

That, and so much more from this December 10th edition of News Of The World for 1947. 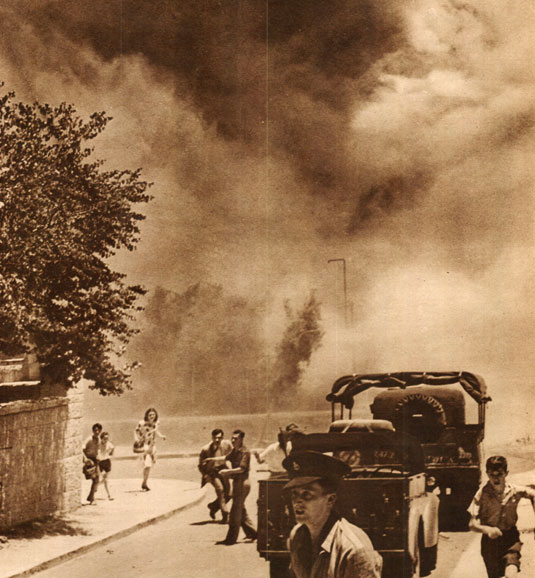 Relentless conflict in the region, even in 1948.

Click on the link here for Audio Player: Story Behind The Headlines – Palestine – 1948

With the current escalation of violence over Gaza, casualties rising by the minute and the threat of a ground war growing hourly, here’s a reminder that the entire region has been in turmoil for decades. This broadcast, part of the Story Behind The Headlines series for NBC Radio, originally aired on December 7, 1948 talked about the on-going violence and opposition to the British Partition plan for Palestine and the establishment of Israel as an independent state.

Commentator and Historian Cesar Saerchinger tries to put some perspective on the region and some history as to why the Middle-East has been so unstable for so long.

Yes, oil does have something to do with it. But then, so does World War 1.

Further evidence that, if there was no solution to be had in 1948, the notion a solution would be easily found in 2012 seems a bit remote.

I don’t think anyone would have anticipated such a protracted air of hostility and violence to be going on for over 65 years when agreements were being mulled over in 1948. 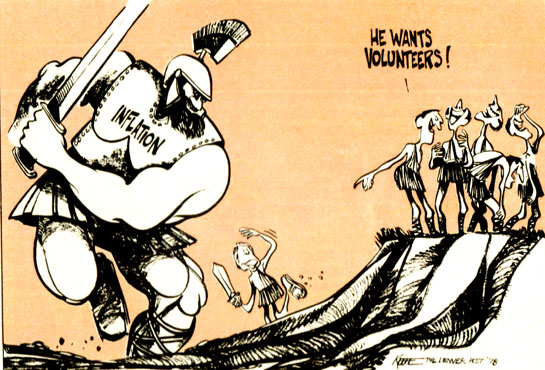 And not getting a whole pile of support.

News on this day was mostly of the Economic variety. Jimmy Carter‘s Anti-Inflation program was not being met with enthusiasm, so it was up to Treasury Secretary Blumenthal to make the pitch for the plan.

Elsewhere – the Supreme Court was set to hear arguments regarding striking workers receiving unemployment benefits while picketing. Speaking of Strikes – it was Day Number 82 for the Pressman’s Strike against the New York Times and The New York Daily News, with talks scheduled to resume. And a wildcat strike against PanAm by Stewards and Stewardesses was underway.

The Washington talks regarding the Egypt and Israel were still going on, with neither side having much to say about it. Japan was lobbying for the U.S. to improve relations with Vietnam, citing fears of a potential growing Soviet influence in the region. Reported border flare ups between Uganda and Tanzania with Uganda denying anything was going on.

Hurricane Kendra was floundering off the East Coast of the U.S. with no threat to land. 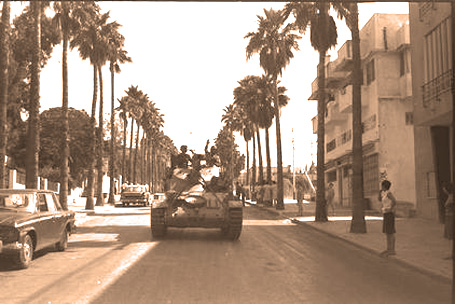 Rounding the end of Day Six in the Six Day War.