Next week will mark the 150th anniversary of the Battle of Gettysburg, the battle that signaled a turn in the Civil War. Obviously, no recordings or on-the-spot news reports from that period exist, but a 75th anniversary observance of the battle in 1938  yielded interviews with some of the last survivors of that battle, in what was referred to as the last reunion of surviving participants in the Civil War.

And it’s interesting and somewhat ironic that, 150 years later, some of the underlying causes for that civil war are being scrutinized again – those things that divide us are still very much there. Makes you wonder sometimes.

But on July 1st in 1938 it was a media frenzy. With batteries of photographers, radio and newspaper reporters descending on the former battlefield and those last surviving members of that battle asked over and over again to retell stories and give eye-witness accounts of a period of time growing dimmer from view even in 1938. Listening back now, seventy-five years after that event and 150 years since the initial event it doesn’t seem so distant. The words of ghosts, maybe. A strange sense of nostalgia at the time – those photos taken by Matthew Brady and the chilling realities that war brings.

History runs a very wide spectrum of feelings and thoughts. The end result asking “was anything learned?”.

You can be cynical or optimistic – they are on common ground here.

Here is that broadcast, from July 1,1938 as presented by The Mutual Broadcasting System. At a scant 15 minutes it seems like lip-service, we could have used more insights – I feel badly for the interview that didn’t happen because there was no time.

The Cure At Glastonbury – 1990 – Nights At The Roundtable: Festival Edition

It just wouldn’t be a festival without The Cure.

Click on the link here for Audio Player: The Cure live at Glastonbury 1990

As you probably know by now, Glastonbury 2013 got started on Friday. It promises to be one of the big must-see festivals this year. Like previous years, Glastonbury promises a wide swath of genres with over 500 bands on 53 stages over the three day festival.

Most all of it is being carried live via BBC Radio 1, BBC 6 Music and the BBC Glastonbury website. According to the BBC, there wil be some 250 hours of live music being covered by radio as well as TV. Needless to say, it’s a an overload of talent and another indication the Festival format will be with us well into the future because frankly, where else do you get to hear so many different kinds of music in one place?

So as a reminder of previous Glasto highs, here’s a set by The Cure, as they performed in 1990.

Stay tuned – hopefully I can get some concerts from this year up this weekend.

In the meantime, enjoy.

Immigration In The World Of 1959 – Past Daily Reference Room 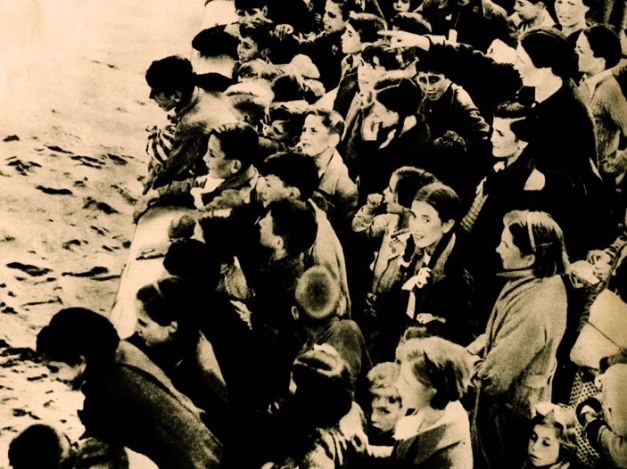 Spanish Civil War Orphans enroute to England in 1938 – by all accounts, only a tiny fraction would be let into the States.

Since the recent passage of new Immigration reform legislation, it’s always interesting to consider where the history is – what were Immigration laws like 20, 30, 50 years ago.

In 1959 it was clear our Immigration policy was broken, or least horribly out of date and balance. In place since the mid-1800s, it favored policies of granting citizenship to those from “northern European” and Scandinavian countries, while virtually excluding Asian and Southern (i.e. African) countries.

As was pointed out during an interview for this program with Edward Corsi, former Special Assistant to The Secretary of State for Refugee and Migration problems, on average 1/6 of 1% of those applying for citizenship, were granted that status. And the vast majority of those granted such status were not from developing or Third-World countries but rather from Norway, Sweden, Germany and England. You get the drift.

So as part of it’s multi-part radio documentary series Image Minorities over NBC Radio, a segment was devoted to the matter of Immigration and discussing what was being done, or at least suggested to be done, about the broken system in 1959.

When you consider the legislation being passed yesterday as having a history going back to the 1800’s, you begin to sense the wheels of fairness tend to move very slowly.

Like the matter of Health Insurance and Universal Health Care – these aren’t issues that suddenly pop up one day and are considered in an off-hand gesture. They are attempts at fixing a broken system that’s been in place for generations, where ungrounded fear becomes the reason to avoid and ignore.

Which is the reason why the Supreme Court ruling to abandon key provisions in the Voting Rights Act of 1965 earlier this week is so tragic. It was an attempt in 1965 to fix a broken and unfair system that had been in place for generations prior to its passage. We forget those things. And we can’t.

Here is the segment on Immigration from the Image Minorities Series produced for NBC Radio on June 25, 1959.